“Chicken Soup for the Soul” author Dana Klosner is new to writing personal essays. But that hasn’t stopped people from gobbling them up. In addition to “Chicken Soup for the Soul: My Crazy Family,” you can find out more about her lovable/hilarious family on “Next Avenue,” and “Motherhood Later…Than Sooner.” Dana has been writing features for too many years to count. She loves writing about parenting, senior issues, health, and profiles. Interviewing and research may be her favorite part of the process. She loves getting inside people’s heads, learning their stories and issues, then finding significant studies to back them up. Her features have appeared in Newsday, The Washington Post, The Baltimore Sun, The San Jose Mercury News, Long Island Exchange, Maryland Life Magazine, Long Island Parent Online, NY Metroparents, and Surfer Magazine as well as local and regional publications.

Dana started her writing career at NBC television in Hollywood. She wrote an episode of a sitcom called “Me & Mrs. C.” Dana has lived and written in Northern and Southern California, Washington, DC, Baltimore, MD and New York. She is a member of The American Society of Journalists and Authors – ASJA. Her features have been reprinted internationally.

Don't miss your chance to get involved in my latest project!

The Beatles go on in the 21st Century and beyond.

It’s a book about the fans and I want to include your stories! Young or old, first generation fan or Gen Z, I’m looking for you. For more information click here: Got To Get Them Into Our Lives.

You think your mom worries?

Mine called the cops on me when I didn’t call for five days. Read about all her antics in my essay, “My Mom the Worrier” in the new “Chicken Soup for the Soul: My Crazy Family.” Buy a copy today for your sister, your brother, your best friend or anyone that has a family. Better yet buy it for yourself and have a great laugh! 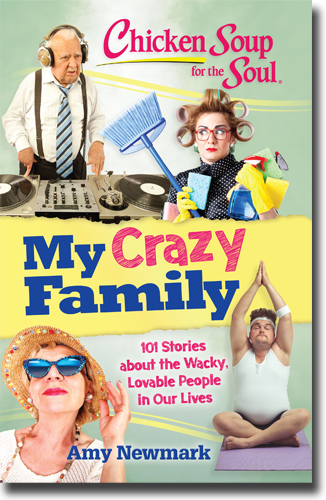 "When I was assistant bureau chief in the Howard County Bureau of the Baltimore Sun, Dana was one of the most reliable and talented free-lance writers I worked with. She needed little guidance or editing, and always brought a professional and positive demeanor to the job. I’d hire her again in a second and know I'd get the best work possible ahead of deadline and with a keen eye and mind for accuracy."
Maureen Conners Dezell
News Editor, The Washington Daybook
"It is always a pleasure working with Dana. She is very reliable, easy to work with, meets her deadlines, and most importantly, has written some great stories that continue to bring in traffic and links to our websites. I look forward to having her write for us for years to come."
John Colascione
Chief Executive Officer, Long Island Media Inc.