(Long Island, N.Y.) Stay-at-home mom Naomi Yochai of North Woodmere loves to fly. But not in a plane. Naomi flies through the air on a flying trapeze, and so do her three kids ages 14, 11 and 6. Naomi and her clan do their flying at I.Fly Trapeze School at both of their locations in Long Beach and Eisenhower Park.

Naomi first experienced the trapeze while on vacation at Club Med in Mexico. She thought it looked like a fun challenge. After the first time she was hooked.

“I like that when I’m on the trapeze nothing else matters,” she said. “It’s all about being free. It’s a big rush. It only lasts less than a minute but it feels like you’re up there forever. It’s an amazing feeling.” “Everybody gets a different thrill out of the trapeze,” said Marco Rosamilia who owns the school with his brother Anthony. “For some people it’s conquering the fear of heights. For others it’s something that was on their bucket list.”

And he assures that flying the trapeze is perfectly safe.

“A lot of people consider it an extreme sport like bungee jumping and sky diving,” Rosamilia said. “But it’s extremely safe. You’re attached to a safety line and you fly over a net. One of the instructors is pulling the line. That same instructor tells you what to do and when to do it. He also controls your descent to the net. It’s unlike snow skiing or water skiing where you can slam your face into the snow or the water.”

Lessons are about 90 minutes and have five to ten people in them. After watching a demo, beginners climb right up the platform and jump off.” “In your first lesson you swing with your legs on the bar to free up your hands,” Rosamilia said. “Then you meet an instructor in the middle and catch, wrist to wrist.” 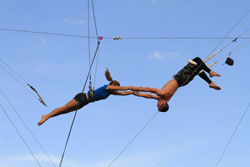 It’s not a sport that you need any experience for and believe it or not, it does not require upper body strength.

“It’s all about timing and technique,” Rosamilia said. “It’s a misconception that it’s dangerous.”

The school takes kids as young as 4 and their oldest flier, Joe Malcomson of Lynbrook was 89 the last time he flew. He made it into the Guinness Book of World Records for being the oldest man on the flying trapeze. 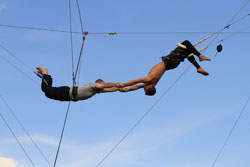 Her favorite trick is the Birds Nest where she swings out hanging from her hands then lifts her feet and arches through so that her feet and hands are touching the bar.

“Then I let go and fly (to the instructor) like a bird.”

Like Mom, Naomi’s son Jonah, 11, and 14 year old daughter, Jodanna first tried the trapeze at Club Med. They both have been flying with I.Fly for about a year, attending classes once a week.

Jordanna’s favorite move is the Gazelle.

“You put one leg on the bar, arch your back and extend the other leg.” 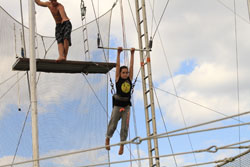 “There’s nothing else you can do that’s like the trapeze,” said Jordanna who brought ten of her friends to the school and most of them have returned. “You feel alive when you get up and jump off the platform. The people who work there make it feel like a party.”

All of the instructors have circus and trapeze backgrounds, Rosamilia said. Some have been trained directly by the brothers.

For more information go to Iflytrapeze.com.