Published November 5, 2013 by Dana Klosner · Under Fun on LI

(Long Island, N.Y.) Mentalist/Magician David Levitan seems to be able to know exactly what you’re thinking but he doesn’t claim to be able to read minds.

His shows amaze audiences and he has entertained thousand s of people at parties, corporate dinners and trade shows. Along the way he has performed magic and mind-reading for celebrities including Alec Baldwin, Donald Trump, Howard Stern and Phil Collins.

Recently he performed at the Manetto Hill Jewish Center in Plainview where he astounded his audience. 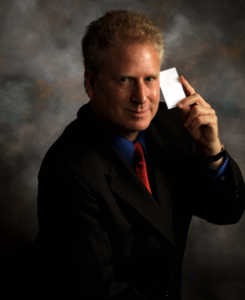 “I didn’t know what was going to happen,” Foldes said after the show. “I was nervous. He mystified and amazed me.”

Levitan went on to prove the power of love. He asked the audience if they had a photograph of someone important to them with them. An audience member volunteered a photo she had. He then talked about an article he read in Psychology Today where a woman jumped in a river and pulled her baby out of the water. She saved the baby but she didn’t know how to swim.

He put the photo in a box. He had only one key to open the box. Then he had a cupful of keys that didn’t open the box. To prove that he had the volunteer take keys out of the cup and try to open the box and it did not open. He told the volunteer to pretend the box is a building with one way in and one way out. Then he had her split up the keys into both hands. He told her to put down the keys she didn’t have a good feeling about. “Now you hear the person screaming,” he told her. Once again she divided the keys into both hands and put down the keys she didn’t have a good feeling about. The tension built. “Now you hear the person pounding on the wall,” he said. She separated the keys again, until she had three keys left. Then he told her to choose a key. That key opened the box. As if this wasn’t enough, the volunteer placed the photo face down into Levitan’s hand. David “knows” the picture is a female with dark hair. “It is your daughter. Her name is Tracy,” he said. He was exactly right.

So, if he’s not reading minds how does he do it?

“When a good detective comes on to a crime scene he can pick up on clues,” he continued. “That’s what I do. I pick up on clues about people. I look at the way they dress, their age bracket and the expressions they make.”

Levitan who is also an accomplished magician says he throws a bit of magic in his show to make it fun.

“What makes it fun for the audience is that they try to distinguish what is real and what is sleight of hand,” he said. “In this show an adult can see it as real magic the way a child watches magic. It really makes you feel like a kid again. You’re watching something that doesn’t make sense.” 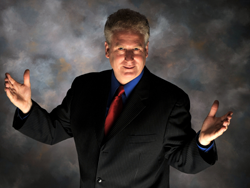 “It started as a hobby when I was a kid,” Levitan said. “I learned magic from books in the public library. I liked being able to create the illusion that the impossible was happening.”

The first show he did was with his younger brother for the next door neighbor’s Girl Scout troop.

“The kids had a blast and I was hooked,” he said.

He started studying mind reading at an early age as well.

“In elementary school I had a fascination with Uri Geller, an Israeli psychic. He was very famous at the time. I would read everything I could about him. He gave people the sense that he was able to read their minds. As I started to develop the ability to pick up on body language and making very good guesses I began to learn the science of reading people.”

“I don’t believe anyone can look at you and know what you’re thinking,” he said. “My show is based in the science of watching people, the body language they use and their eye movement.”

“What’s exciting is that every time I’m in front of a new group I never know what’s going to happen,” he said. “Every show is different, every group is different. It’s never the same thing. I love being able to do something that makes people happy and takes them away from day to day life.”

Levitan performs magic and mentalism for corporate clients, at sales meetings, and trade shows where he mixes product information into his act. He also performs at private parties and Bat Mitzvahs. He travels all throughout the US and internationally.

For more information go to www.davidlevitan.com.